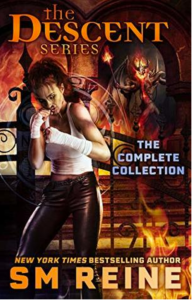 DESTINED TO BE A WEAPON. Elise Kavanagh is good at one thing: killing demons, angels, and gods. For years, she was the death that supernatural creatures feared. More myth than woman, she walked the Earth as the embodiment of vengeance.

DENYING HER DESTINY. Elise wants to retire with with the man who has long protected her body and mind. James Faulkner is a powerful witch, and the only one she trusts to protect her identity. Together, they go into hiding and try to become normal people…whatever that means.

DESTINY WON’T BE DENIED. It’s not easy to retire when you were born to be a killing machine. Old enemies still hold bitter grudges against Elise. The demon overlord of her new home isn’t happy to have the Godslayer hiding out in her territory. And there are still gods that need to be killed…

ONLY ONE WAY OUT. Elise must descend into the infernal to become the very thing she’s spent most of her life fighting: a powerful demon that feeds upon human flesh. A creature that might survive slaying God.

Elise is one of the most badass characters I have ever read. If you love kickass female leads, this is your series. Not only does the series go for seven books, but The Ascent Series further follows Elise’s journey. If you’re ready to get invested in a great adventure, these books are for you.

A bit sociopathic, I found Elise satisfying to read about. No frills. No nonsense. She just goes after it full-tilt. And after everything she’s been through, her attitude is wholly warranted, not to mention necessary for the world she’s involved in.

The secondary characters were all likable and believable as well. Get ready to have your heart torn and stomped (but n the best way, of course).

The pacing of the series was fantastic. Each book gives us just a little bit more about the broader picture, and when we find out whose side everyone is really on– well, just wait for it! While the origin of it all felt a bit trivial when it first comes up, in hindsight, it’s the ultimate story-starter. What else could have set this all in motion?

I’m an origin story lover, so Book 6: Defying Fate was my favorite. When the shoe drops about James’ history, the jaw will hit the floor, guaranteed.

Angels, and demons and God play significant character roles throughout, making this a niche genre not done as often as many others. Another reason to read this series. Get out of the box a bit! You won’t be disappointed!

Comment with your current, or favorite reads. I tend to review only indie authors, but I read ALL books! Tell me what’s in your library.

This site uses Akismet to reduce spam. Learn how your comment data is processed.